The project entailed using angled, rather than vertical, drilling methods to install a well that will enable more thorough monitoring and characterization of a contaminant plume in groundwater beneath LANL. The angled method assisted drillers in avoiding disturbance of the pueblos’ nearby cultural sites.

The new well, named R-71, exists on the northwestern boundary of a hexavalent chromium plume beneath LANL in Mortandad Canyon.

Hexavalent chromium was flushed into Sandia Canyon between 1956 and 1972, when LANL personnel used the contaminant as a corrosion inhibitor in the cooling towers of its non-nuclear power plant. At the time, chromium was used industry-wide for such purposes.

Angled drilling has proven an effective strategy for maintaining the integrity of a well’s proposed location without impacting the numerous cultural sites that exist in Mortandad Canyon. N3B has completed four other angled wells around LANL.

“With angled drilling, tracking the trajectory of the borehole is crucial for determining the subsurface depths of geological formations and the water-producing zones we want to reach in relation to the hexavalent chromium plume,” said Tom Klepfer, drilling project manager with Tech2 Solutions, an N3B critical subcontractor. “We run several directional surveys during drilling to provide the precise data we need.”

The cultural sites that exist across LANL property are protected by federal and state laws, such as the Archaeological Resources Protection Act (ARPA) and the National Historic Preservation Act (NHPA). N3B and its registered professional archaeologist comply with the NHPA on all projects to avoid adverse effects to cultural resources.

“Cultural sites are non-renewable resources,” said Sean Dolan, N3B’s cultural resources specialist. “Once the site is gone because of archaeological excavation — which could happen, for example, if project managers can’t move a well to another location to achieve adequate groundwater monitoring, the site’s cultural significance is lost.

“This is our nation’s heritage, where people lived before European contact, and we can learn a lot from them, including how they farmed, their resilience in the face of a changing climate or how they migrated to survive,” added Dolan. “We understand and value the significance of these sites and always strive to protect them.”

Most cultural sites on LANL property stem from ancient American Indian cultures, with the oldest dating back 7,000 years. Those sites include stone tools and pottery sherds, along with petroglyphs once used as a form of symbolic communication.

Other sites consist of fieldhouses, or small structures used as second homes by farmers during harvest season, and cavates, or rooms excavated from the cliff face and used for habitation or storage. Many of these resources hold cultural and religious significance to today’s pueblo members in Northern New Mexico.

“By keeping these resources intact, we’re demonstrating our respect for the cultural traditions of the pueblos,” said Shawn Stone, N3B’s environmental programs and services director. “We’re also maintaining areas for visitation by tribal communities, which is crucial.”

Other cultural sites include homesteads and wagon roads, which have been etched into the rock, from Hispanic and Anglo settlers of the early twentieth century. In addition, structures used for research and development during the Manhattan Project- and Cold War-era are also protected.

To minimize potential disturbance when installing R-71, an existing well pad — the ground surface that crews level and fill with gravel to create a work area — was used to set up the drill rig and stage well construction materials.

Workers are nearly finished installing another groundwater monitoring well, known as R-72, located in the southwestern portion of the chromium plume. Vertical drilling methods were used for R-72, which will support additional plume characterization.

Installation of R-71 and R-72 will complete two fiscal year 2022 milestones under an agreement between DOE and the New Mexico Environment Department that guides the LANL legacy cleanup. 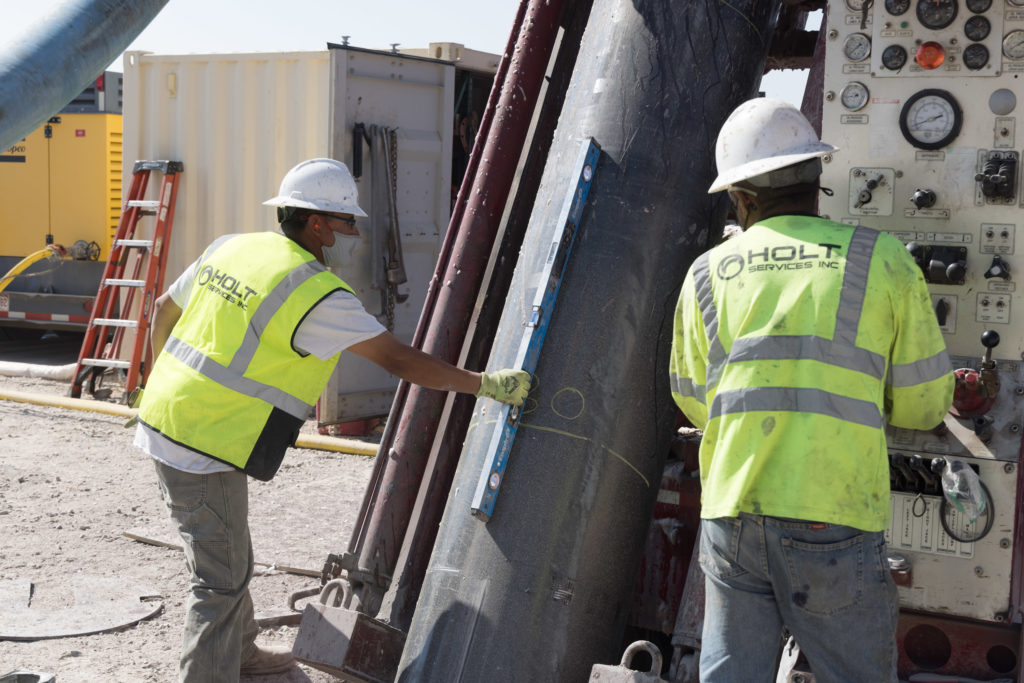 While drilling a borehole for a groundwater monitoring well, the drill crew checks the angle of the drill rod to ensure accurate intersection with the desired sampling locations. Known as R-71, the well will support further characterization of a contaminant plume in groundwater beneath Los Alamos National Laboratory.