From 1956 to 1972, chromium-contaminated water from cooling towers was periodically released from the cooling towers into Sandia Canyon. Chromium was commonly used as a corrosion inhibitor. The water flowed from the power plant down Sandia Canyon as surface water, penetrated the underlying rock layers, and in time seeped into the regional aquifer beneath Sandia and Mortandad canyons. LANL ceased releasing chromium-contaminated water in 1972.

Control migration of the chromium plume and reduce the plume footprint, while investigating the final remedy

Chromium Interim Measure at a Glance

An interim measure is a set of actions that have a high probability of meeting environmental protection goals until a final remedy is  implemented. In the case of the chromium plume, a combination of extraction, treatment, and injection is being used to control plume migration and hold it within the LANL boundary.

The Interim Measure, approved by the New Mexico Environment Department, is needed to mitigate plume growth.

The Interim Measure will take place over the next several years until a final remedy has been identified and is being implemented.

Number of monitoring, extraction and injection wells installed in and around the plume

Depth of the regional aquifer. Chromium is located within the top 100 feet of the  aquifer.

Approximate size of the chromium plume 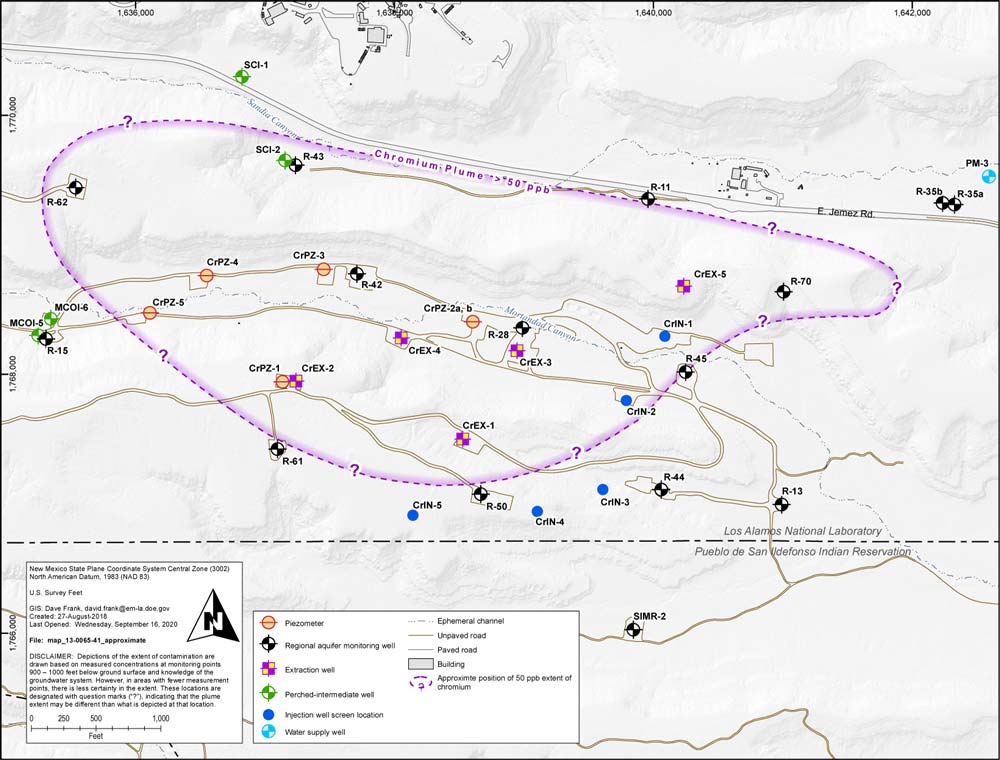 What is being done to address the chromium plume at Los Alamos National Laboratory?

A network of 35 monitoring, extraction and injection wells has been installed in and around the chromium plume. These wells and associated infrastructure support efforts to characterize the plume and to prevent the plume’s advancement via an Interim Measure (IM). To date, the focus of the IM has been along the Los Alamos National Laboratory (LANL) southern boundary with the Pueblo de San Ildefonso. While the IM is underway, aquifer and plume characterization is being conducted to refine the site conceptual and numerical models that will support development of a final remedy.

What is the status of the plume?

As reported by the Department of Energy (DOE) in various documents, including the semiannual performance monitoring reports, as a result of the IM, the plume along the LANL southern boundary with San Ildefonso has shrunk approximately 350 feet of where it was at the start of the IM in 2018.

Are more monitoring wells needed to better understand the shape of the plume?

Yes. Several additional wells will be drilled over the next two years to further characterize the plume. These wells will refine the understanding of the plume and support the ongoing IM and the final remedy.

Is chromium from this plume present in Los Alamos County water-supply wells?

Are there pathways for chromium from this plume to contaminate water-supply wells?

The actions of DOE and its cleanup contractor N3B are reducing the footprint of the plume while a permanent remedy is developed. As well, DOE and N3B are working closely with Los Alamos County to ensure that nearby water-supply wells are appropriately monitored so that the county can take action if it were to become necessary. There is no practical way for the chromium contamination to reach the Buckman Well Field (which serves as part of the water supply for the City of Santa Fe and Santa Fe County). The possibility of chromium from the plume reaching the Rio Grande is extremely unlikely, due in part to the distance of the plume to the river and because of the protective actions being taken to reduce the plume footprint.

Is there a possibility chromium is being unknowingly drawn into a Los Alamos County water-supply well?

It is extremely unlikely. Additionally, monitoring of sentinel wells located directly upgradient of the nearest county water-supply well would identify chromium that might be migrating towards it. The county’s water- supply wells, which are also sampled for chromium on a quarterly basis, show chromium concentrations consistent with naturally occurring levels.

How close is the plume to the boundary with San Ildefonso?

As of October 2020, the southern edge of the plume is currently estimated to be approximately 350 feet from the LANL boundary with the Pueblo de San Ildefonso. At the start of the IM, the plume was approximately at the boundary.

Has the original source of chromium contamination been cut off?

Yes. A non-nuclear power plant, the source of the chromium contamination, stopped releasing water with chromium from its cooling towers in 1972. There are no active sources of chromium at LANL.

The chromium contamination was discovered in 2005. What has DOE been doing since?

Since the plume was discovered in 2005, wells have been installed to characterize and monitor the plume’s behavior. Comprehensive groundwater models have been developed to guide locations of wells and to inform the IM strategy. The wells, treatment system, and several miles of piping necessary for the IM

also have been installed. The IM has been operating along portions of the plume since 2018 with periodic interruptions for building and integrating additional wells and piping infrastructure. The focus to date has been largely along the southern plume edge along the LANL boundary with the Pueblo de San Ildefonso.

How does the Interim Measure work?

Chromium-contaminated groundwater is pumped from the regional aquifer via extraction wells and piped to a centrally located treatment system that utilizes a technology called ion exchange to remove chromium from the groundwater. The treated water is then pumped to injection wells located near the downgradient edge of the plume via a network of pipes. Over time, the injection of the treated water will reduce the chromium concentrations at the edge of the plume and reduce the plume’s size.

When will the Interim Measure be fully active?

The IM is operational along the southern edge of the plume near the boundary with the Pueblo de San Ildefonso. The start of full implementation of the IM is scheduled for late 2020.

What will the final strategy be for the treatment of the chromium plume?

DOE and N3B are evaluating potential approaches to remediate the plume. The final remedy will be proposed to the New Mexico Environment Department (NMED) by DOE and is subject to public participation and approval by NMED.

When will the final remedy be implemented?

No date has been established for final remediation. However, the goal of the IM is to ensure that the footprint of the chromium plume remains within the LANL boundary while the technical approach for final remedy is evaluated and approved. The timing of the final remedy will be dependent on the approach selected and a process that involves public participation and NMED approval.

Select a question from the drop down below and we will respond to you soon.