Crews collected groundwater samples from springs, which are surface expressions of the regional aquifer, and gathered sediment samples at the mouth of several tributary canyons that run into the Rio Grande, and along the river itself.

Typically, samples as part of this campaign are collected during a three-day raft trip, which begins along the Rio Grande at Otowi Bridge on N.M. Hwy 502 and ends at the reservoir on Pueblo de Cochiti. This year, due to COVID-19 and the social distancing mandate, crews hiked an average of four miles per sampling location to access many sites usually reached by raft. Crews drove to three locations. Average samples collected at each site consisted of 20 bottles, which weighed about 40 pounds after sample collection. All sampling materials and samples were transported to and from the site by backpack.

Several sampling locations lie along the banks of the Rio Grande on Pueblo de San Ildefonso, U.S. Forest Service and Los Alamos County land and require approval prior to access. In addition to access approval, crews received briefings on the potential hazards encountered while hiking from mesa tops to canyon bottoms.

“There are no doubt routine environmental hazards during this campaign, like rattlesnakes and poison ivy,” said David Fellenz, N3B’s groundwater monitoring technical lead. “Two years ago, one sampling location was inaccessible because rattlesnakes had established a den at the site. Last year we resumed sampling at that spot and immediately saw a rattlesnake eating a northern flicker. So it’s important our team’s prepared for those routine, but potentially risky encounters.”

The annual White Rock Canyon sampling campaign marks the beginning of the groundwater and sediment monitoring year, which spans Oct. 1, 2020 – Sept. 30, 2021, at and around LANL facilities. Each year, N3B submits a facility-wide groundwater monitoring plan for approval to the New Mexico Environment Department (NMED). This year’s plan was submitted June 1, 2020 in advance of a Consent Order milestone. The 2016 Consent Order is the enforceable agreement between NMED and DOE for the cleanup of legacy waste at LANL.

During the groundwater monitoring year, N3B collects groundwater samples from 195 locations on and around LANL property, including wells, springs and surface water sources. Sample results are made public in the Intellus New Mexico database.

N3B also collects sediment samples from 85 additional locations, covering every canyon on and around LANL property. Sample results are published in the Annual Site Environmental Report. 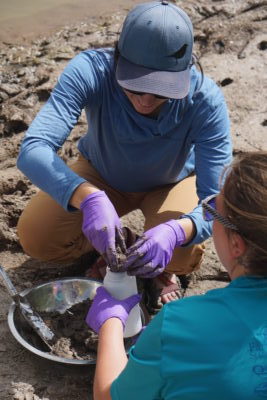