The wells are instrumental to the interim measure’s treatment system, which operates by pumping contaminated water from the aquifer, piping it to a centrally-located treatment facility where chromium is removed, and then returning the newly cleaned water to the aquifer via injection wells.

Efforts have been successful in pushing back the plume edge nearly 500 feet from where it was located before the interim measure began operation. The plume edge is defined where concentrations of the contaminant fall below the state standard of 50 parts per billion.

“Our focus to date has been on the southern plume edge, which was very close to LANL’s boundary with the Pueblo de San Ildefonso,” said Danny Katzman, N3B’s groundwater remediation manager.

“The combination of extraction, treatment and injection has resulted in a significant reduction in the extent of hexavalent chromium contamination along that boundary, where sampling results from a key monitoring well have shown a consistent drop in chromium levels,” Katzman added. “These results demonstrate the interim measure is effective at controlling migration and reducing the size of the plume.”

Hexavalent chromium contamination in groundwater beneath LANL resulted from a non-nuclear power plant. From 1956 to 1972, workers periodically flushed chromium-contaminated water from the power plant’s cooling towers into Sandia Canyon. At the time, chromium was commonly used as a corrosion inhibitor at industrial sites across the country. LANL ceased using chromium for this purpose in 1972.

Progress on the interim measure is documented in a report submitted to the New Mexico Environment Department on March 31, 2021, successfully completing a milestone under the 2016 Consent Order. The Consent Order is the enforceable agreement between NMED and DOE for the cleanup of legacy, or pre-1999, waste at LANL.

Be sure to read the EM Update newsletter story on the interim measure becoming fully operational here. 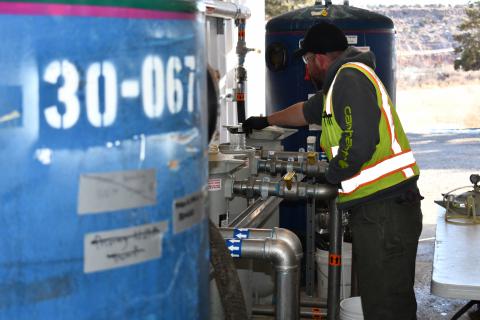 N3B’s Ryan McGuill assists in replacing an ion exchange unit in January 2020 where groundwater contaminated with hexavalent chromium is treated.