N3B cleans up hazardous and radiological waste generated at LANL during the Manhattan Project and Cold War eras for the U.S. Department of Energy’s Environmental Management Los Alamos Field Office.

The U.S. Fish and Wildlife Service (USFWS) listed the Mexican spotted owl as a threatened species in 1993, when population numbers were decreasing drastically due to the loss, degradation and fragmentation of their habitat.

In 1999, the U.S. Department of Energy and National Nuclear Safety Administration coordinated with the USFWS to create a habitat management plan to safeguard protected species at LANL.

“In addition to experiencing habitat degradation, spotted owls, which typically have the same mates for life, have a low reproduction rate, so survivability of their offspring is incredibly important,” said N3B environmental specialist Don Ulrich.

Activities that N3B modifies include those that cause habitat alterations — or changes to the soil structure, vegetation, prey quality and quantity, water quality or noise and light levels — regardless of whether survey crews identify owl nesting pairs.

In areas where crews do locate nesting pairs, so-called disturbance activities are also avoided. Areas with known spotted owls remain restricted through August 31. In areas where owls aren’t detected, regular fieldwork may resume as early as May 31.

“Project managers know the closures come every year, so they plan ahead and prioritize other projects,” Ulrich said. “The owls’ existence is valuable, and we strive to protect and create space for other species.”

With USFWS concurrence, all sampling and monitoring of groundwater, surface water, storm water and sediment will continue during nesting season. These activities ensure N3B maintains compliance with the 2016 Consent Order for site cleanup. 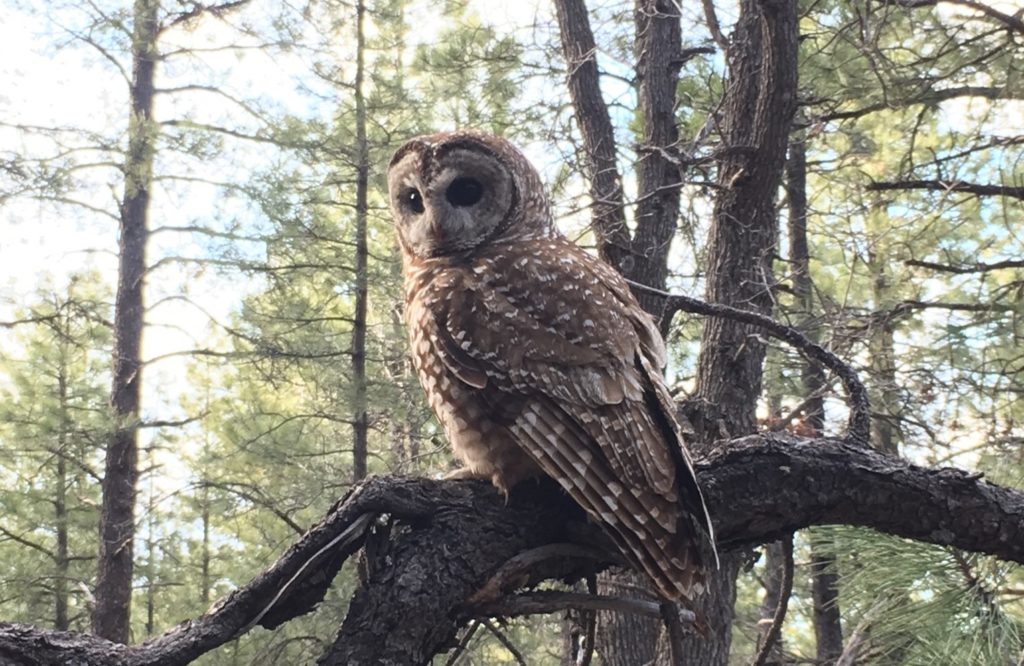 The Mexican spotted owl, which finds a home in Northern New Mexico’s canyons and forests, is a threatened species that N3B strives to protect. (Photo courtesy of Don Ulrich, taken in Flagstaff, Arizona.)