LOS ALAMOS, N.M. – Despite unseasonably low water levels this year, N3B Los Alamos has been able to navigate shallow sections of the Rio Grande and its tributaries to sample for contaminants related to historical operations at Los Alamos National Laboratory (LANL).

“Due to drought conditions, the river was the lowest it’s been in the past 20 years for this sampling campaign,” said Kevin Reid, program manager for TerranearPMC, a subcontractor that supports N3B’s groundwater monitoring program. “The river’s average flow at this time of year is typically 700 cubic feet per second. This year it was 400 cubic feet per second.”

In the more than 30-year history of the annual sampling campaign, groundwater sample results have indicated that contamination from LANL is not present in the springs of the canyon.

After scouting the Rio Grande to ensure navigability for this year’s campaign, N3B crews rafted for roughly 20 river miles, managing rocks and sandbars along the way. They collected samples from the river itself, both upstream and downstream of LANL, to assess whether contaminants were reaching the river from LANL’s historical footprint.

They also gathered samples from springs at the mouth of several tributary canyons that run into the Rio Grande. The springs in White Rock Canyon represent the area’s groundwater conditions because they are surface expressions of the upper portion of the regional aquifer beneath LANL.

“Sampling the springs to assess groundwater conditions proves much more efficient than installing multiple monitoring wells,” Reid said. “And accessing the sites via raft, which takes only three days, is much preferred over hiking to the sites, which can span two weeks.”

Workers sample for several potential contaminants, including radionuclides; metals such as chromium; and volatile organic compounds, which are manmade chemicals typically found in industrial solvents.

Sampling spots include locations on Pueblo de San Ildefonso, the U.S. Forest Service, and Los Alamos County land. Prior approval is required to access these sites. This year, crews entered the five sampling sites on Pueblo land by foot following the raft trip.

During a typical monitoring year, N3B conducts several campaigns to collect groundwater samples from 195 locations on and around LANL property. Sample results are made available to the public in this database.

“The sampling campaign in White Rock Canyon is something we look forward to every year,” Reid said. “But when it is all said and done, and the snakes and canyon are left to their peace, it’s a relief.”

N3B implements the environmental cleanup of waste generated at LANL during the Cold War- and Manhattan Project-era on behalf of the U.S. Department of Energy’s Environmental Management Los Alamos Field Office.

For questions or high-resolution versions of the photos, please contact Kate Keenan at (505) 695-3046. 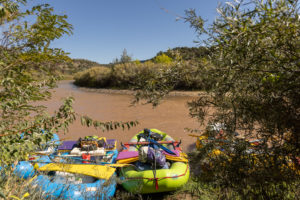 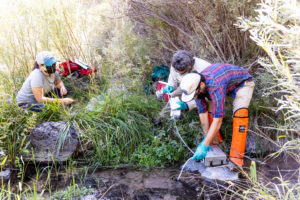 Sample crews don snake gaiters to protect themselves against potential rattlesnake bites as they collect water for analysis at a spring along the Rio Grande.