Management of contaminated buildings in TA-21

Decontaminate and remove the existing structures, waste lines and tanks, debris and obsolete equipment, and implement the final remedy

In fall 2018, N3B awarded a $1.5 million subcontract to TerranearPMC of Los Alamos, New Mexico, and its partner, Envirocon of Missoula, Montana, to decontaminate and remove above-ground debris from TA-21.

Define potential final remedies for MDAs A and T and begun process for public review and final selection by NMED, implement final remedy, complete site remediation, and complete all documentation necessary to allow transfer of the property to Los Alamos County for beneficial community use.

MDA A is an inactive 1.25-acre subsurface legacy disposal site situated at TA-21. Portions of MDA A are managed as a nuclear facility due to the contamination levels. Combustible and non-combustible radioactive solid wastes were disposed in the central pit and in the two eastern trenches. There is very little documentation detailing the types of chemicals and quantities of radionuclides in the pit and trenches. Radioactive liquid wastes were stored in two 50,000-gallon underground tanks (dubbed the General’s Tanks). From 1975-1981, much of the liquid fraction of the waste was pumped from the tanks, leaving residual liquid and sludge at the bottom of each tank.

MDA T, located immediately west of MDA A, is a 2.2-acre radiological waste disposal site. It consists of four plutonium-contaminated absorption beds used to dispose of liquid wastes from 1945-1952; a retrievable waste storage area; a series of disposal shafts containing radioactive elements; an acid holding tank and acid sump; a caisson built in 1959 at the northwest corner of absorption bed 1; an inactive container storage area for alcohol, acetone, and freon; and two surface spills of radioactive waste.

Under the Compliance Order on Consent (Consent Order) between the Department of Energy (DOE) and the New Mexico Environment Department (NMED), cleanup at TA-21 is divided into two campaigns: (1) TA-21 D&D and Cleanup and (2) Material Disposal Areas A & T Remedy.

Presumed Remedy: TA-21 D&D and Cleanup Campaign – This campaign includes the removal and remediation of buried waste lines and contaminated soils. Demolition of facilities and slabs are not part of the Consent Order and will be executed under DOE requirements; the structures to be demolished include the DP West slabs and the Radiological Liquid Waste Treatment Facility, enabling access to contaminated soils.

Presumed Remedy: MDAs A and T Remedy Campaign – This campaign will result in long-term isolation of contamination to prevent release to the environment and subsequent exposure to humans. The General’s Tanks, two 50,000-gallon underground storage tanks containing the remnants of aqueous plutonium residues, are expected to be exhumed from MDA A, and the final remedy for both MDAs is expected to include construction of an engineered cover and long-term performance.

WHAT REMAINS: Below-Ground or At-Grade

Transfer of Land at TA-21

After TA-21 is cleaned to regulatory standards, EM-LA will transfer authority to NNSA, the federal landlord, who in turn will transfer it to Los Alamos County.

To protect businesses along DP Road during remediation activities, N3B will continue to:

• Operate with the highest safety standards necessary to protect the workers and the public
• Communicate with key stakeholders about the project status and related issues
• Strive to minimize disruption while safely maintaining schedule commitments. 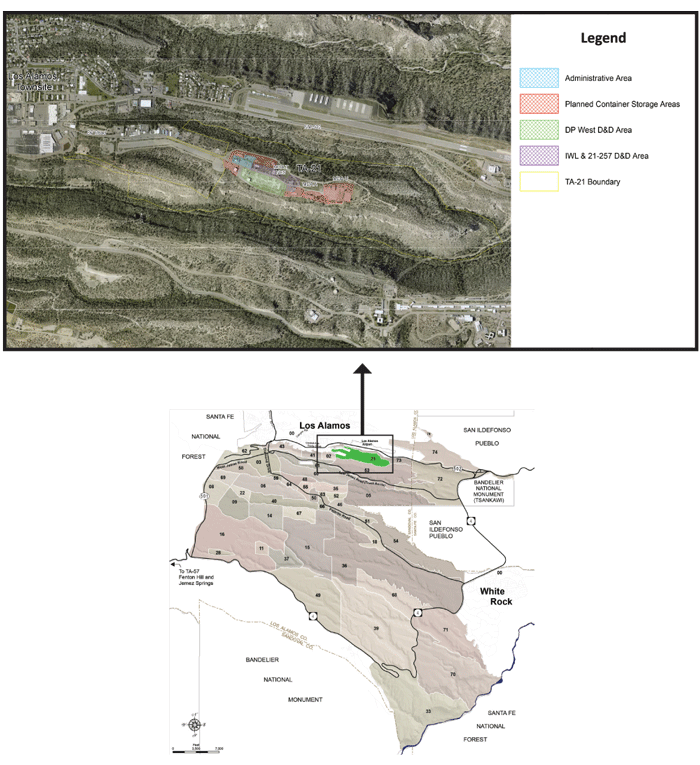