This webpage provides updates on the investigation the U.S. Department of Energy’s (DOE) Environmental Management Los Alamos Field Office is conducting of land parcels along DP Road where historical materials from Los Alamos National Laboratory were found in 2020. The purpose of the investigation is to gain confidence that radioactively contaminated debris will not be encountered during future development of the land parcels owned by Los Alamos County.

See the Project Updates section for the latest reports from the field. See the Background section for a description of the issue and previous work completed.

This week, N3B began shipping containers of low level radioactive waste originating from the Middle DP Road (MDPR) site to the Waste Control Specialists (WCS) site in Texas for permanent disposal. Each container consists of about 16 cubic yards of soil removed from the MDPR site during the 2020 investigation and installation of utilities.

Field work began at the Middle DP Road (MDPR) Site on April 15. To help gain confidence that radioactively contaminated debris will not be encountered during future development, N3B will investigate about 124 sites. Investigation activities will include excavation, cleanup and sampling. Click “Read More” to view a map of the MDPR Site.

Beginning the week of April 12, the Los Alamos residents should expect to see increased truck traffic as N3B begins an environmental investigation of two land parcels on the south side of DP Road.

The New Mexico Environment Department has approved the work plan for investigating the Middle DP Road (MDPR) Site. The work plan, Solid Waste Management Unit Assessment Work Plan for Middle DP Road Site, Revision 1, lays out the work to be done at MDPR, as well as background and history.

The property where the sampling work is being conducted was part of Los Alamos National Laboratory (LANL) Technical Area 21 (TA-21), which was used decades ago for the production and purification of plutonium and polonium. The investigation is focusing on portions of two land parcels on the south side of DP Road: A-16-a and the adjacent A-8-a, both of which are now owned by Los Alamos County (LAC). The area of investigation is known as the Middle DP Road Site. 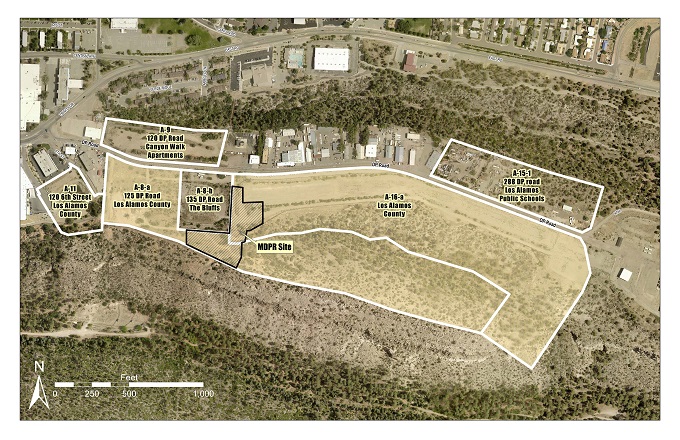 Samples of debris showed radiological contamination adhered to the debris with little to no transfer to the surrounding soils. The contamination was identified as very early Manhattan Project uranium and plutonium.

The results from the trenching effort and localized excavations on A-8-b and the uncommon nature of the plutonium and uranium contamination debris of LANL origin found on the Middle DP Road Site have helped guide the investigation approach that is being used.

The purpose of the investigation of the Middle DP Road Site is to determine the extent of possible additional contamination on these two land parcels and to remove the contamination that has already been discovered. Project work includes air monitoring, site inspections, investigation implementation, soil and debris sampling, contaminated debris removal, where possible, waste disposition, reporting, and stakeholder interaction.

The investigation field work on the Middle DP Road Site started on April 15, 2021, and is expected to conclude in late fall 2021.

The photos and maps below show work being done by N3B along DP Road.

When and where along DP Road was contamination discovered?

In February 2020, a contractor conducting work along DP Road on land that formerly was part of Los Alamos National Laboratory (LANL) found unexpected material. The material was analyzed and determined to have originated during the Manhattan Project Era. Out of an abundance of caution, and in partnership with Los Alamos County, the Department of Energy (DOE) undertook excavation work along DP Road. Contaminated materials were found on two land parcels: A-16-a and A-8-a. The materials were discovered about 200-400 feet south of DP Road, across from the western most portion of the existing businesses and on lands further to the west. See this map of the area.

What was found on these parcels? Did DOE dispose of the materials?

Radiologically contaminated materials of LANL origin that were found included metal items, debris and glass. These contaminated materials were packaged and safely shipped off-site for proper disposal.  In another excavation, a yellow soil-like substance was uncovered that was determined to be oxidized processed uranium, which was placed in a safe configuration until a proper investigation was implemented. The excavation sites were fenced off, and signs marking the presence of radioactive materials were posted.

Why is DOE conducting field work on DP Road? When will the work start?

As noted above, in 2020, contaminated materials of LANL origin were found on two land parcels along DP Road. DOE is conducting potholing and associated sampling on the two land parcels to gain confidence that radioactively contaminated debris will not be encountered during future development on both parcels. The safety of the community and the environment are of the utmost importance.

The field work is scheduled to be begin in April 2021, and last several months.

What will DOE do if more contamination is found?

Will this work affect businesses along DP Road?

We are working with the local developer, DP Road businesses and LAC to minimize impacts to access. We expect a slight increase in truck traffic, but nothing that would impact access to local businesses.

Was any contamination found where housing is being developed?

No. Following the discovery of materials on parcels A-8-a and A-16-a, DOE sampled the adjacent land parcel A-8-b, site of a future housing development. The intent was to gain further confidence that contaminated debris would not be encountered during development activities. The sampling on A-8-b was completed in December 2020 and no contaminated materials were found.  Development on the land parcel began.

Is DOE coordinating this activity with Los Alamos County? How about with the New Mexico Environment Department?

Yes. DOE is working with Los Alamos County and the New Mexico Environment Department (NMED) to ensure the fieldwork is done in a safe, effective, timely, and compliant manner. The assessment work plan that DOE is using on the two land parcels was reviewed and approved by NMED. DOE has provided regular updates to Los Alamos County on field work related to DP Road and will continue to do so. DOE also shares monitoring data with Los Alamos County as appropriate.

How long will it take DOE to clean it up?

Sampling on the land parcels A-8-a and A-16-a is expected to take several months. The results of the field work will determine what additional activities may be required and how long they will take.

How do we know that this additional screening will find all possible contamination on DP Road?

The assessment work plan approach has been statistically designed to maximize the likelihood that contaminated materials, if present, will be found.

Select a question from the drop down below and we will respond to you soon.